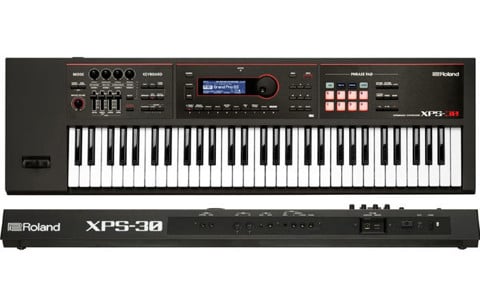 The XPS-30 starts with the great feature set of the popular XPS-10 and adds many powerful enhancements that performing players will love. Stage essentials like acoustic and electric piano sound even better, and the internal waveform set can be easily expanded with free sound collections from Roland’s Axial website. The selection of regional instrument sounds has been increased as well, and more user samples can be imported thanks to the doubled onboard memory capacity. There’s also a built-in eight-track pattern sequencer for capturing songs and ideas, plus a convenient mic input with dedicated vocal effects.

Mobile and Ready to Perform
Easy to carry and easy to use, the XPS-30 is an ideal keyboard for performing musicians. It’s filled with ready-to-play sounds like pianos, organs, strings, brass, and synths, plus authentic local sounds from around the world. And with its ability to run on batteries or AC power, you’re able to take the XPS-30 anywhere you want to play.

High-Quality Pianos and Regional Sounds
Gigging keyboardists rely on acoustic and electric pianos more than any other sounds, and these essentials have been newly enhanced in the XPS-30 for improved tone and response. In addition, the regional instrument selection has been expanded, providing even more versatility for local playing. The complete sound sets from the XPS-10 and JUNO-Di are also included, and patches from those keyboards are fully compatible with the XPS-30.

Deep Editing and Real-Time Controls
With its intuitive, instant-access design, the XPS-30 makes it simple to call up excellent sounds on the spot. But if you like to customize things, you can dive deeper and tweak patches and performances with detailed precision. The front panel also includes numerous hands-on knobs and sliders for creating patches and adjusting sounds while performing, while the rear panel features jacks for connecting hold and expression pedals for further real-time control.

Wave Expansion Slot for Easy Sound Expansion
To complement its impressive onboard sound set, the XPS-30 supports internal waveform expansion via USB for unlimited tonal range. Over 1000 EXP sounds are available for free download at Roland’s Axial website, including top-quality acoustic piano collections, world instruments, go-to studio standards, percussion, loops, and more. If don’t find what you need there, it’s even possible to load in WAV sounds from your personal library and play them from the keyboard! Out of the box, the XPS-30 comes with the versatile EXP-06 Studio Collection preloaded in the wave expansion slot.

Phrase Pads for Triggering Songs and Samples
The XPS-30 is equipped with eight Phrase Pads (two more than the XPS-10), allowing you to supplement your keyboard performances with samples or music files stored on USB memory. Just load up the pads with whatever you like—one-shot samples, vocals, sound effects, loops, or complete music tracks—and trigger them with a quick touch when needed.

Mic Input with Vocoder and Auto Pitch
If you’re a solo performer or singer/songwriter, you’ll love the XPS-30’s mic input, which lets you get great vocal sounds without having to carry around extra gear. There’s a dedicated vocal reverb, plus Auto Pitch for singing with the popular “stepped” electronic vocal effect heard in a lot of modern music. The built-in vocoder is big fun too, allowing you to sing into a mic and control the tone and pitch via sounds played on the keyboard.

Eight-Track Pattern Sequencer
When you have an idea for a song or beat, you can easily capture and develop it with the onboard pattern sequencer. The intuitive, non-stop operation won’t interrupt your creative flow, letting you build up full arrangements with multiple sounds in no time. The sequencer is also perfect for enhancing live performances with pre-made backing and on-the-fly looping.

Music Production Partner
The XPS-30 is not only great on stage—it works great for computer music production as well. The integrated USB interface provides a solid front end for a mobile or studio recording setup, allowing you to record MIDI and audio data, including sounds from the mic input. There’s even a dedicated DAW Control mode for controlling your music software from the XPS-30’s front panel.

1 slot
* The wave expansion slot is rewritable internal waveform memory. You can download data from the Axial sound library site and write it via a USB flash drive into the XPS-30's internal wave memory (slot).

* Battery life for continuous use (differs depending on the conditions of use)
Rechargeable nickel metal hydride batteries: approximately 5 hours (when using batteries having a capacity of 1900 mAh) (approximately 4 hours if USB flash drive is connected)
* Carbon-zinc or alkaline batteries cannot be used.

*1 When using the KS-18Z, ensure that the height of the unit is one meter or lower.
*2 Use USB Flash Memory (supports USB 2.0 Hi-Speed Flash Memory) sold by Roland. We cannot guarantee operation if other products are used.